One of my favorite recipes pre-THM was Cinnamon Roll Oatmeal. This oatmeal was cooked in milk, so it was super creamy, was laced with the perfect brown sugar cinnamon mix and was topped with a creamy icing. It probably had as much sugar as three donuts! I’ve been craving a breakfast similar to my old standby, so I decided to create a healthier version of this oatmeal with a protein filled glaze and plenty of cinnamon flavor. Did I mention this recipe is an E? This recipe makes a single bowl of oatmeal but is sure to be a crowd-pleaser if you multiply it. 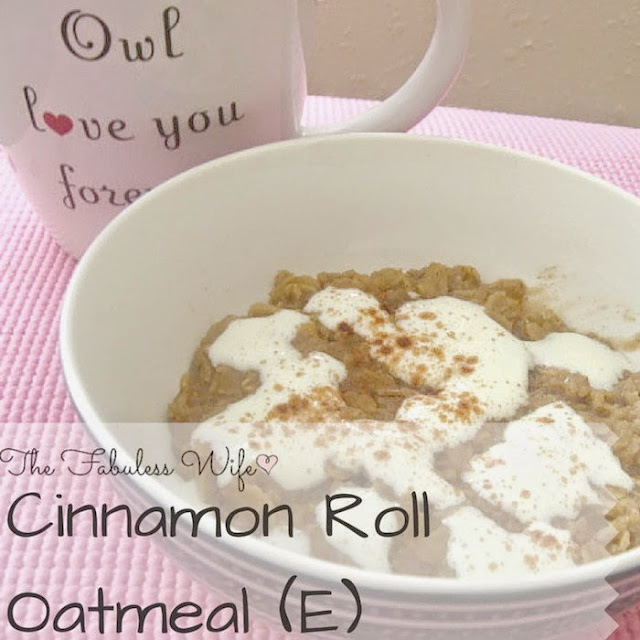 Mix 1/2 C. of rolled oats with 1 C. of almond milk in a small saucepan. Let this cook over low-medium heat until the oats are cooked to your liking. When your oats are done, stir in 1/8 t. molasses, sweetener to taste (I used 3 T. Truvia), 2 t. cinnamon and a dash of salt.  Let the oatmeal cool while you create your “icing”. To make the icing, mix 1 T. protein powder with 2 T. Greek Yogurt, 1/4 t. butter or caramel flavoring, and sweetener to taste. I wanted my topping super sweet, so I used 1 1/2 T. Truvia. If this glaze mixture is too thick, you can add 1/2 T. almond milk. Drizzle the glaze over the oatmeal and garnish with a sprinkle of cinnamon!

This oatmeal is the perfect E breakfast paired with some berries or a small wedge of cantaloupe. The greek yogurt and protein powder provide the perfect amount of protein to start your day!

Mix the oats and almond milk together and cook over medium-high until done. Stir in Truvia, cinnamon, molasses, and salt. Combine greek yogurt, protein powder, extract and Truvia in a small bowl. Add a dash of almond milk if too thick. Drizzle over the oatmeal. Enjoy!


More from my site

for your weekly recipe fix.

Previous Post: « 6 Jobs For Busy Stay at Home Moms
Next Post: Simple Ways To Save Money On Baby #2 »